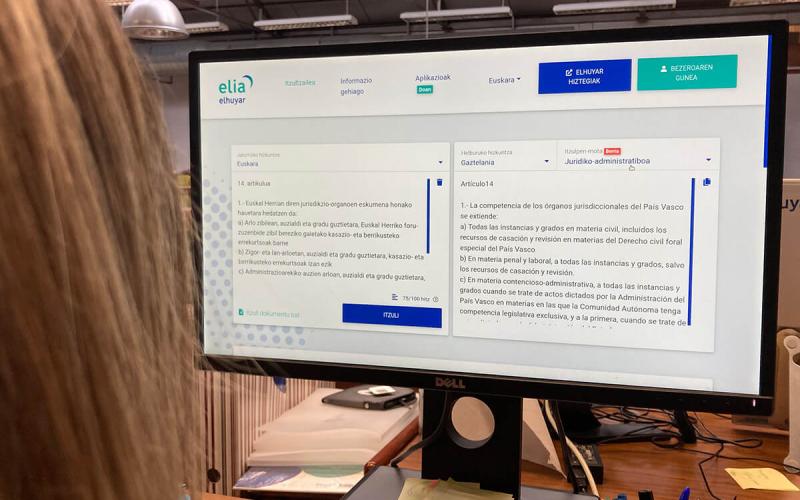 Elhuyar has incorporated into the automatic translator Elia a specific system for translating legal and administrative texts. It also offers two other innovations: the possibility of editing phrase to phrase translations and a guided machine translation, that is, a system that helps to make the translation.

So, by the end of the year, there are three innovations offered by Elia.

The legal and administrative translation has been investigated and developed in the TANPER project, financed by the HAZITEK programme of the Basque Government, with the help of the European Regional Development Fund (ERDF).

Finally, thanks to the financial support of the Provincial Council of Gipuzkoa, Elia now offers the possibility of a guided translation. The user can make changes to the translation proposed by the system, with the help of the system: by clicking on a word, the system will offer different possibilities for the text immediately after said word.

In addition to these three innovations, Elia added at the beginning of the year the possibility to personalize translations, an option that allows words or phrases to be translated at the user’s liking. Elia is the first automatic translator of Euskera to offer this possibility, which is very useful as it helps to maintain the internal consistency of the texts.

The automatic translator for Elhuyar can be used on the address: If the user registers, in addition to the new options discussed, Elia also offers the possibility to incorporate custom dictionaries so that the system will translate the words we have indicated to us.

Elia translates between these six languages in a few seconds: Basque, Spanish, French, English, Catalan and Galician. In addition, the application of mobile devices allows the translation of text images. Thus, we can use it to translate texts from our own photographs and images that come to us through social networks.