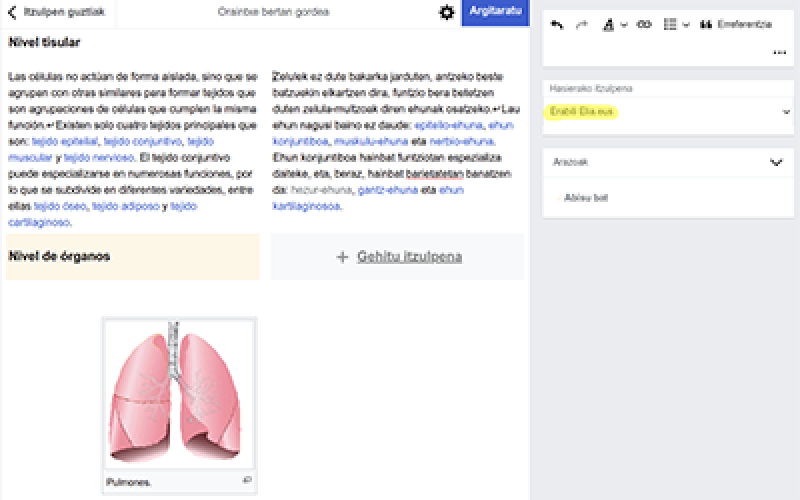 2021 | December 09
Thanks to the agreement signed between the Wikimedia Foundation and Elhuyar, Wikipedian editors will be able to use the automatic translator Elia de Elhuyar to translate content between these six languages: Euskera, Spanish, French, English, Catalan and Galician. So far the automatic translator of Elhuyar Matxin was integrated into Wikipedia for the Euskera language couple, and has now been replaced by Elia, which gives much better results and is more useful.

This collaboration has a double benefit. On the one hand, it is a useful tool for editors to create new content, as it facilitates the adaptation of articles in other languages. On the other hand, it will make it easier for content created in the Basque, Catalan and Galician languages to be transferred to Wikipedias in larger languages. This will result in a significant benefit for the end user, who will find more information on the wikipedia of their language thanks to the work done by the editors through Elia.

Elia is an automatic translator based on artificial intelligence and neural networks developed by Elhuyar. In addition to the web and mobile application, it can also be used integrated into various systems, such as Wikipedia. Perform quick and very good translations.

For Wikipedia in Euskera, the signing of this agreement is strategic, as it provides users with another tool to increase the presence of the Basque in the digital sphere. The Wikipedia in Euskera, created on December 6, 2001, has just turned 20, and is among the Wikipedias with the highest content, specifically at position 33.It is also important that content written in Basque and other minority languages such as Catalan and Galician can be translated into other languages.