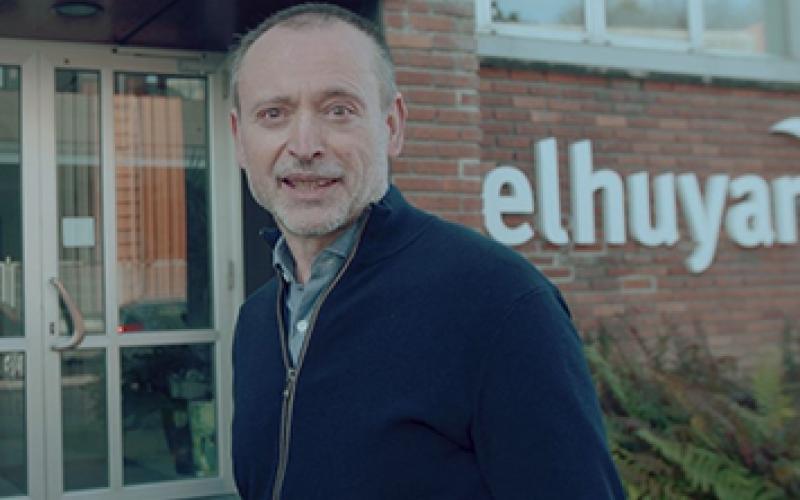 2021 | November 26
Alfontso Mujika Etxeberria, a co-worker at Elhuyar, has been appointed a number scholar from Euskaltzaindia at the plenary session held today by the Academy in Pamplona. But who is Alfontso?

Alfon (known for his peers and friends) was born in the Egia district of San Sebastian on October 28, 1959. The middle son of the three sons and daughters of a Castilian family grew up in an environment where the Basque was absent until, in his youth, among other things fascinated by the songs of Mikel Laboa, he aroused his interest in the Basque language and began to learn it.

At the age of 17-18, the Basque language classes at the AEK Night School (the Gau-Eskolas) were appointed. Later, the family of the Iriarte dwelling house in Orexa opened the path of the Basque language even further, as well as teaching him to collect hay, fill the cattle and prepare the cattle fines. In fact, he lived an experience very similar to that of Joxean Sagastizabal in the book Kutxidazu bidea, Ixabel. What we don't know is whether in that place where Orixe was born there were also some Ixabel.

He was always a good student and soon went not only to speak but to dominate the Basque; at 23 he had already started working as a professor of Basque at AEK. After working as a professor, he became responsible for the organization of the Donostialdea area of AEK and then took the leap to UEU, the Basque Summer University, where he performed management tasks.

Since 1990 he has worked in Elhuyar, where he has collaborated in numerous departments: he was editor of the Encyclopedic Dictionary Elhuyar and editor of the Encyclopedic Dictionary Harluxet in 1995. He also worked as editor of the Teknopolis Science Outreach Programme (1999-2001), which he then ran from 2000 to 2002. Since then he has worked in the translation and correction service of Elhuyar, where he highlights his commitment to reasoning and resolving the linguistic doubts that are emerging and to develop clarifying criteria. His work was crucial in creating the Eusker-Castilian bilingual dictionary of Elhuyar, and is currently actively collaborating in correcting and updating the dictionary. He is also a professor of the Basque Technical subject at the Technun School of Engineering in Donostia. He is also the secretary of the Board of Trustees of the Elhuyar Foundation since his foundation.

He studied Industrial Technical Engineering at the UPV-EHU, but, among other reasons, encouraged by Jaione, his wife, has always performed her professional work in the field of modernization and standardization of the Basque, and is a real reference for all those working in the development of dictionaries, as well as in translation and in determining criteria for the good use of the Basque.

As proof of this, prior to his appointment today as a number scholar of Euskaltzaindia, he was appointed academician in 2006 and member of the Commission of Terminology of the Basque Government in 2008.

However, long before these appointments, I was already actively working on the development of recommendations and criteria for the correct and appropriate use of the Basque language, both through various publications and through training courses aimed mainly at language professionals.

Thus, since 2002 he has participated in the Basque Commission of Exonomastics, and since 2016 also in the Commission of Onomastica, and is also secretary of both committees.

He is also adviser and reviewer of the work team of the Euskara Batuaren Eskuliburua (Unified Euskera Manual) of Euskaltzaindia, and has written two volumes of the manual of the Advisory Council on School Materials (EIMA), under the Basque Government: Onomastika (Onomástica) and Letra larriak erabiltzeko irizpideak (Criteria for the use of capital letters). In addition, in 2019 he was responsible for the writing and editing of the book Kale eta karriken izenak hautatzeko eta idazteko irizpideak (Criteria for the Choice and Writing of Street Names), published by the Onomástica commission of Euskaltzaindia.

Moreover, it has also been involved in the network resources of EIZIE, the Basque Language Translators, Correctors and Interpreters Association for over 20 years, such as the Itzul mailing list and the blogs 2tzuL and 31 eskutik.