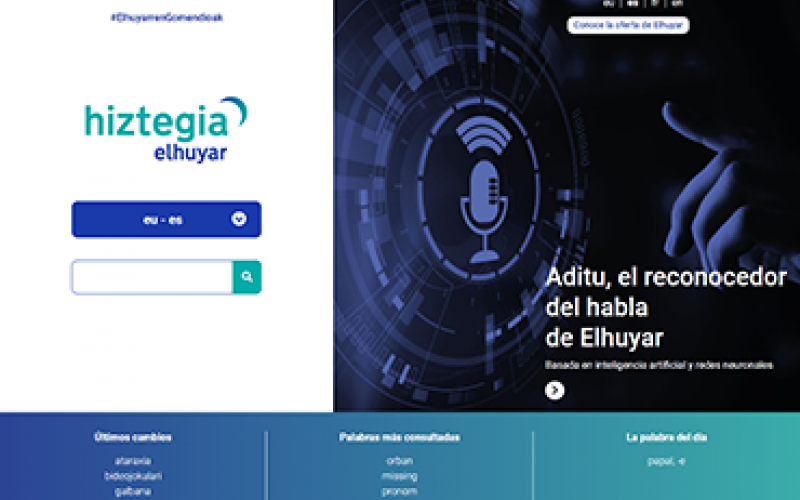 One of the emblems of Elhuyar, the Elhuyar dictionary, is 25 years old, and to celebrate it, we have renewed the dictionary consulting web and the app for mobile devices.

The EU-ES bilingual dictionary of Elhuyar began in 1996 to make a space on the shelves of schools, libraries and homes in the Basque Country, and has since become a reference both for professionals working in the Basque country and for those learning and teaching Basque.

Over these 25 years, the EU-ES dictionary has had several printed editions and later the EU-FR and EU-EN dictionaries arrived.

The leap from paper to digital format occurred in 1999, and since 2013, simultaneous consultations can be held in all three dictionaries through computers and mobile devices.

To celebrate its fourth century, we have renewed the web and mobile app, both in form and in substance. In addition to providing it with a modern and innovative design, we have incorporated a simpler query system and included real examples of the Internet in the dictionary entries thanks to the Dabilena corpus web portal.

The three bilingual dictionaries of Elhuyar (EU-ES, EU-FR and EU-EN) are available on the web, and when performing searches from the Basque we can see the results of the three at a time.

In the case of EU-ES entries, both monolingual (EU) and bilingual Internet examples are shown, thanks to the Dabilena corpus web portal.

You can also consult the recommendations published periodically to help you write and speak correctly in the Basque language.

As well as being a reference in the field of linguistics, Elhuyar is a reference in the new technologies, and thanks to this referentiality in both areas, it continues to continuously update and improve to make available to Basque society resources and cutting-edge tools. The new dictionary web is proof of that.