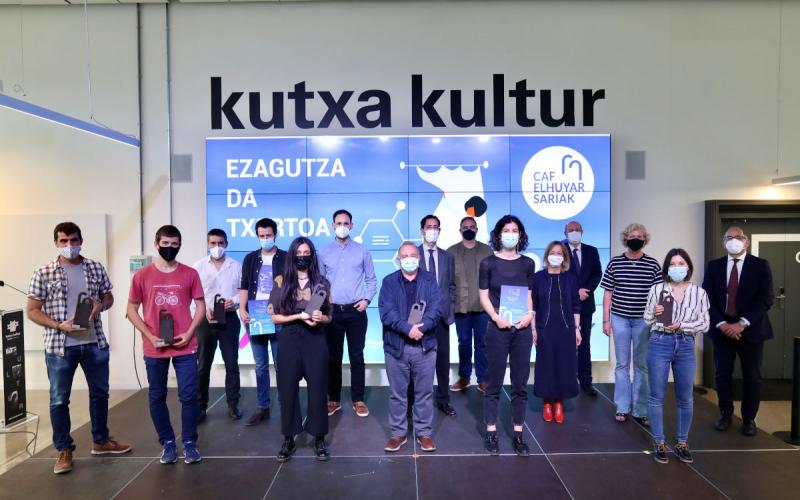 CAF-Elhuyar awards ceremony, under the slogan "Knowledge is the vaccine"

The ceremony of the CAF-Elhuyar awards took place today at the Kutxa Kultur Square in Tabakalera (Donostia-San Sebastian), with limited capacity and broadcast via streaming, due to current circumstances. “Ezagutza da txertoa” (Knowledge is the vaccine) has been the motto of this year’s contest. It is a slogan of total actuality, and proof of this has been the number of papers presented, 64. It can be said that both people dedicated to research and lovers of science have joined the slogan and the object of the call, which is to promote, reward and recognize the dissemination, journalism and socialization in Basque of science and technology issues and research.

This edition has received a total of 64 works, and it is noteworthy the proportionality in the gender of the participants. The jury has decided to award the following works in each category:

The prize for the general informative article has gone to Nahia Seijas Garzón, from Amurrio, with the article entitled “Alferrik saiatzen gara natura giltzapetzen” (We try to put nature under lock). When rewarding the work, the jury stressed that the author gives an integral view to the subject and tells the history of history in a pleasant and attractive way; from the journalistic point of view, he stressed that the thread of the article is well yarn.

For his part, the dissemination prize based on the author’s doctoral thesis was for Ainara Sangroniz Agudo, for his work “Polimero jasangarrien garapena elikagaien ontziratzerako” (Development of sustainable polymers for food packaging). Sangroniz is from Elgeta. According to the jury, the article reports an investigation that responds to a current problem; it highlights the current and objective of the work of wishing to improve the world.

In the category of scientific journalism works, the jury has noted that the award-winning work is an article of full relevance, while presenting a personal vision of the author, based on observation and contemplation, which brings originality. The report entitled “Etxeko leihoak naturaren behatoki” (The House Windows as an Observatory of Nature), written by Hernaniarra Iñaki Sanz Azkue, has been the winner, and was published in the weekly Gaur8 and in the digital newspaper Naiz last March.

Although in the category of scientific journalism only one work can be awarded, the jury has decided that another of the presented deserves a special mention: the entitled “Pentsatu, ez sinistu” (think, do not believe), by Jon Urzelai Urbieta, from Zumarraga. The jury notes that this broadcast of the KKinZona radio program of the communicative project of Urretxu and Zumarraga explains concepts about the pandemic, facing superstitions, pseudo-truths and denialist theories and spreading scientific culture.

The Special Neiker Award aims to reward the works of the primary sector, and this year’s winner has been the Zumaiarra Asier Alvite Arregui, for his work “Betizua, Europako azken behi basatia desagertzear?” (The last European wild cow breed, the betizus, endangered? ). The members of the jury in this category give special relevance to the fact that the works have an innovative, technological and useful character, and affirm that the winning article fully meets these criteria.

In this category, the jury also wanted to highlight another work with a special mention. This time, Helene Sánchez Zelaia has been awarded for the work “Klima-aldaketa eta mahastizaintza” (Climate change and viticulture). According to the jury, in this article the author offers a solution to a current problem, based on interdisciplinarity and practicality.

All the winners have received a prize of 2,000 euros and a sculpture by Imanol Andonegi Mendizabal.

In addition to the aforementioned awards, the CAF-Elhuyar competition is awarded a scholarship of 5,000 euros, with the aim of promoting projects whose purpose is to act as a link between science and society. This year, however, two scholarships of this type have been awarded: the Donostian Itxaso Navarro Celestino has received one of them, to develop the work “Sonata 00001011-Spam irudien soinu transdukzioen kontzertua” (Sonata 00001011- Concert of sound transductions of spam images); the other scholarship has been for the Euskal kartografia garaikideak” (A city of 15 minutes, a territory of 45 minutes. Contemporary Basque cartography).

On the first work, the jury stressed that it proposes a new technique and makes an interesting reflection, bringing spam to another language. As for the second, the jury points out that the work raises a contemporary concern related to urbanism and that it can be useful for social reflection.

Finally, the Board of Trustees of the Elhuyar Foundation awards the Elhuyar Merit Award, with the aim of honoring the people who have excelled in the normalization of Basque and in the dissemination of science and technology. This year, Jabier Agirre Lasarte, a doctor with a long history in favor of Basque, will be recognized for his work in the scientific dissemination and normalization of Basque.

The jury that has valued informative articles and journalism works has been composed of Arturo Elosegi Irurtia, ecologist and researcher of the UPV/EHU; Marian Iriarte Ormazabal, chemist and researcher of the UPV/EHU; Alberto Barandiaran Amillango, journalist and writer; and Aitziber Ruiz magazine director. Arantza Madariaga Aberasturi, director of the Elika Foundation; Pilar Santamaría Martínez, area manager of the HAZI Foundation; and Rikardo Bueno Zabalo, director of BRTA.

The works presented for the Science in Society creation scholarship, on the other hand, have been evaluated by Lorea Agirre Dorronsoro, director of the Jakin Foundation; Koldo Almandoz de La Cruz, film director; Josu Rekalde Izagirre, professor of Art and Technology at the UPV/EHU; and Irune