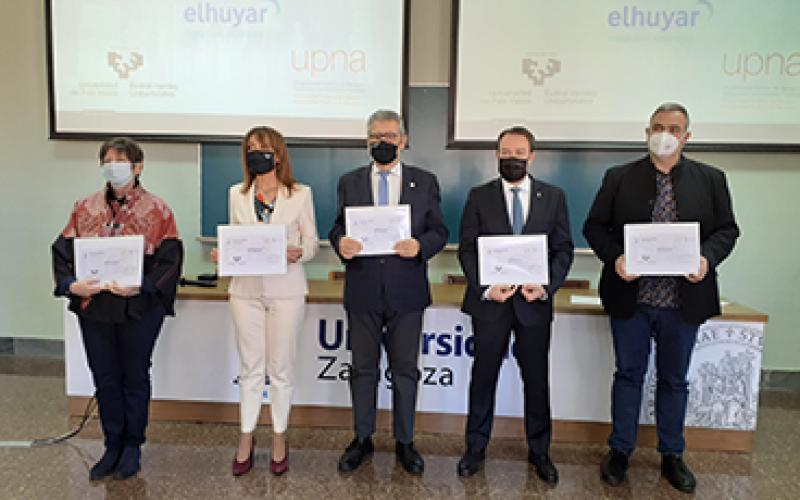 The universities of Zaragoza, Pau, País Vasco and Pública de Navarra sign a collaboration agreement with Elhuyar to promote artificial intelligence in language

The Mayor of Jaca, Juan Manuel Ramón and the General Director of Linguistic Policy of the Government of Aragon, José Ignacio López Susín, also attended the signing ceremony.

The agreement signed, which will last for four years, sets out the lines of collaboration between the entities involved in the use of language technologies developed in the European LINGUATEC project. A cross-border cooperation project aimed at developing, demonstrating and disseminating new resources, tools and innovative linguistic applications to improve the level of digitisation of Aragonese, Euskera and Occitane. The Project has enabled technological cooperation between languages to develop new resources and language tools, as well as new on-line applications to facilitate the use of the three languages and multilingual access to content by end-users.

Thus, Elhuyar, an entity that aims to promote, promote and develop science and the Basque Country, will be responsible for making available to universities the technological tools and applications developed for the Basque, Aragonese and Occitana languages. Among them are the technologies of machine translation, voice recognition and voice synthesis that have been integrated into applications such as the downloadable bars for Google Chrome and Firefox, plugins for CMS such as Wordpress, correctors, APPs for machine translation and multilingual accessible audio guides (Elia, Translate, Aragonario, Aditu, VOTZ, ReVOc, Lincomo Virada)....

Public universities, for their part, which have, among others, the functions of creation, development, transmission and critique of science and technology, will use and implement these tools, and will collaborate in the evaluation and improvement of them, as well as in the generation of ideas and projects for future developments that will help improve the multilingual, intelligent and accessible management of universities. They will also collaborate in projects in artificial intelligence applied to language that help in the technological development of the Basque, Aragonese and Occitana languages.

In order to carry out the development and monitoring of the Convention, a Joint Monitoring Commission shall be set up, with the aim of promoting actions that enable the objectives and conditions set out in the Convention to be met. The committee shall meet on an annual basis.