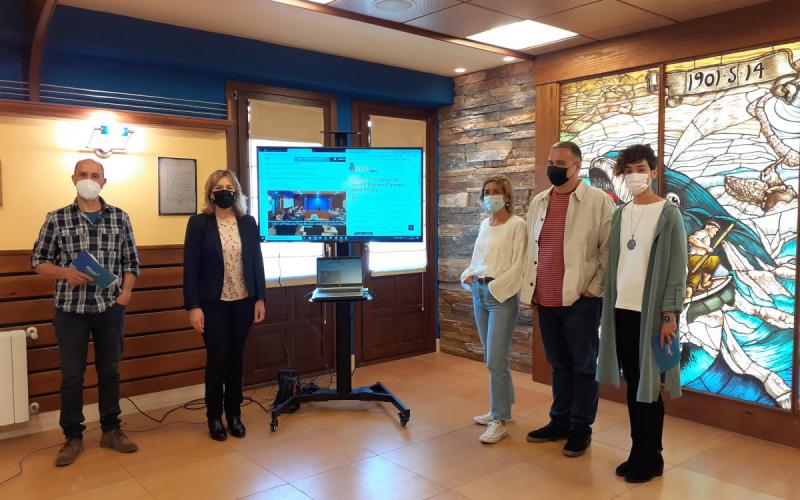 Elhuyar, the City of Orio and the Provincial Council of Gipuzkoa present the results of the UdalHiztek project

Elhuyar, the City of Orio and the Provincial Council of Gipuzkoa today presented the results of the UdalHiztek project in the town hall, which aims to encourage the use of Basque in the daily functioning of municipalities through language technologies. The presentation was attended by Jon Abril Olaetxea, general coordinator of Elhuyar; Anuska Esnal Oliden, mayor of Orio; and Garbiñe Mendizabal Mendizabal, general director of Linguistic Equality of the Provincial Council of Gipuzkoa. Also present were those responsible for the project Itziar Cortés Etxabe and Juanjo Pérez Martínez de Lahidalga, both of Elhuyar.

This project, promoted by Elhuyar and carried out for a year and a half at the City of Orio, has been funded by the call for grants Etorkizuna Eraikiz–GipuzkoaLab of the Provincial Council of Gipuzkoa. The process has been led by Elhuyar and has counted on the participation of the leadership of Strategy and Linguistic Equality of the Provincial Council of Gipuzkoa, as well as the involvement of technical staff and political leaders of the City of Orio. For this pilot experience the City of Orio was chosen, as it met the requirements to carry out the project (in the City Council already operated in Basque, and sociolinguistically is Euskaldun), and showed his firm conviction in the project and his willingness to participate in it.

The use of the two official languages usually causes numerous headaches and problems in the day-to-day administration, especially when all documentation must be written in both languages. The UdalHiztek project was born with the aim of improving the management of these theories. Its objective is, therefore, to detect the needs of a city council to carry out its internal and external communications in Basque, and to propose and apply solutions with the help of linguistic technologies, from the centrality of Basque. In fact, UdalHiztek seeks to make town councils work in Basque, covering the linguistic needs of staff and citizens who do not know Basque, through language technologies.

This project places Basque at the centre, and ensures that the contents of the city council are written in Basque. In addition, it allows to increase linguistic competence and avoids the usual additional work in bilingual contexts, thanks to the neuronal translator and to appropriate instructions and procedures.

The project, however, is not limited to the mere implementation of certain technologies. That is the last step. Previously we analyze the sociolinguistic situation of the city council, identify the difficulties and aspects of improving staff to work and write in Basque, as well as other types of limitations or difficulties (videos, audiovisual, network content…). A series of improvement hypotheses are proposed and two main lines of work are established: on the one hand, a series of technological solutions are proposed related to the daily linguistic needs of the City Council; on the other, based on them, a methodology of action is agreed. The technologies used in Orio are two:

Thus, the City of Orio wants to use these linguistic technologies as support, to ensure that the municipal operation is entirely in Basque. They are suitable tools to work in Basque and therefore serve to improve the management of the City Council. And it is that, working only in Basque, and leaving the translation work to the machine, the City Council can be much more efficient, freeing itself from the burden of working in two languages. Orio City Council wants to use language technologies to advance efficiency and efficiency while improving the quality of the language in which it works.

This project can become an ideal partner to create circuits in Basque in administrations and ensure understanding in bilingual contexts. In this way, as in the City of Orio, it will not be necessary to publish all the documentation in the two languages, since those who do not know Basque will receive information through language technologies.

It should also be noted that the use of this type of technology guarantees the accessibility to the contents of administration personnel and citizens, and not only with regard to language, since subtitles, for example, are also very useful for people with hearing disabilities.

The promoters believe that it is a propitious moment for the expansion of the project, on the one hand, because the knowledge of Basque from the staff of the administration is currently the highest in history; on the other, because the advances achieved in linguistic technologies in recent years provide a great technological capacity; and finally, because the Law of Local Institutions of Euskadi opens the possibility of the Councils working fully in kera.