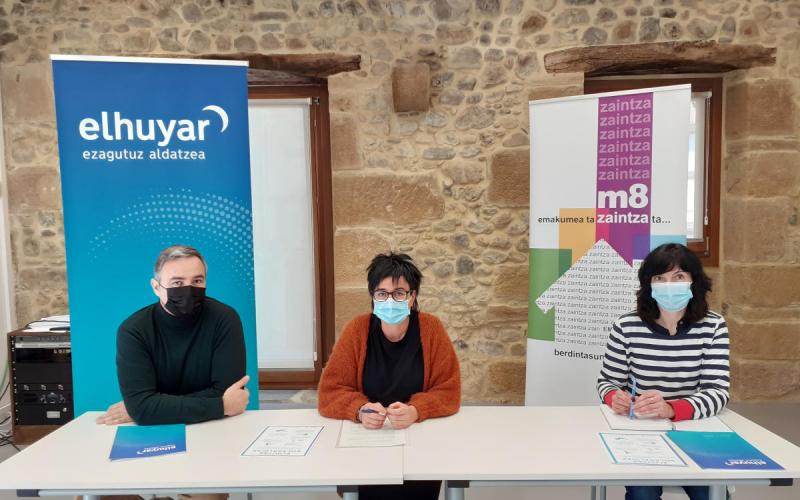 2021 | March 24
The talks will take place from 14 April to 12 May, every Wednesday, in the Sutegi room in Usurbil and streaming, at 18:30. The talks will focus on the following topics: the context of COVID-19, care, critical thinking, the ecological construction of the economy and artificial intelligence in language.

With the aim of disseminating the influence of the pandemic in different areas of society, the City of Usurbil and Elhuyar have jointly organized the cycle of talks “Elhuyar solasaldiak”. The initiative was presented today at the Casa de Cultura Potxoenea in Usurbil. Agurtzane Solaberrieta Mesa, mayor of Usurbil, Jon Abril Olaetxea, general coordinator of Elhuyar, and Garazi Andonegi Beristain, coordinator of the Elhuyar Science Unit were present.

The lecture series is part of the Zientziakide project launched by Elhuyar to bring science to the public. Zientziakide's goal is to promote citizen participation and bring society closer to science, as well as to foster responsible research and innovation (RRI). Zientziakide, therefore, wants to be a bridge between the Basque system of science and society, something that aims to deepen the initiative “Elhuyar solasaldiak”.

To this end, 5 talks have been organized, which will take place on Wednesdays, at 18:30, in the house of culture Sutegi and which can be streamed on usurbilkultura.eus and zientzia.eus portals. The talks will be free, but to follow them in person in Sutegi it will be necessary to register previously, due to the current capacity limitations.

COVID-19 and its implications will be the main themes, but not the only ones. Thus, at the first conference on 14 April, Ana Galarraga Aiestaran, a member of Elhuyar, will offer a conference entitled “covid-19aren korapiloak deslotzen” (“Untying the knots of COVID-19”), in which she will contemplate pandemic and vaccines from different approaches.

At the second conference, on April 21, Maite Santxo Castiello and Miren Aranguren Etxarte will address the issue of care. On the one hand, Santxo will reflect on the model of care that the Matia Foundation is carrying out with the City of Usurbil and, on the other hand, Aranguren will present the study on care carried out in Beterri-Buruntzaldea.

In the fourth session, on 5 May, economist Mirene Begiristain Zubillaga and biologist Arturo Elosegi Irurtia will talk about the need to bet on ecological reconstruction after COVID-19. Both Begiristain and Elosegi are two of the signatories to the document published by more than four hundred Basque scientists.

In the last talk, on May 12, Xabier Arregi Iparragirre, professor at UPV/EHU and member of the IXA group, and Xabier Saralegi Urizar, member of Elhuyar, will talk about artificial intelligence in language, and, in particular, how to deal with it with a social perspective.

Collaboration between the City of Usurbil and Elhuyar

Usurbil City Council is a partner of Elhuyar and a member of its board. The collaboration and relationship between both entities is therefore not a novelty. This collaboration aims, among others, to promote the normalization of Basque and the socialization of science and technology. Year by year, this collaboration is formalized in a program of activities in which the projects to be developed are concretized. In this sense, it is noteworthy the collaboration for the Harria Hitz tour, in which Elhuyar offered the technology that allowed to make accessible the tour to know the cultural heritage of Usurbil, or the process of defining the joint building Pelaioenea as House of Women.

In these times when COVID-19 has shown more than ever the need to spread scientific knowledge among citizens, the City of Usurbil and Elhuyar will maintain their collaboration through a series of talks. Elhuyar works to achieve a critical, active and egalitarian society, goals also made by the City of Usurbil.