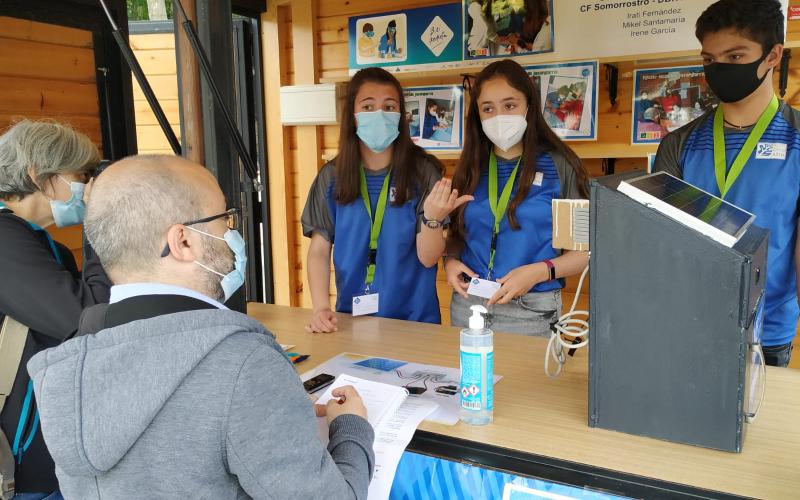 The students show their projects in Elhuyar Zientzia Azoka

Elhuyar Zientzia Azoka started at 12:00 with the official opening. At the opening of the Elhuyar Zientzia Azoka fair in 2021, Koldo Narbaiza Olaskoaga, Councillor of the Basque Area and Education of the City of Bilbao, Eva Armesto Macías, Deputy Director of Economic Promotion of Bizkaia, Begoña Pedrosa Lobato

During the morning, students between 12 and 18 years old have presented the scientific projects carried out during the course. Due to the health situation, only the 20 finalist groups have been able to participate in the Bilbao fair, where several universities have also presented their research projects. The aim of the Elhuyar Zientzia Azoka fair is to promote the scientific vocation among youth and promote and disseminate scientific culture.

Award Award The award ceremony took place in the Ensanche building at 5 p.m. and was broadcast in streaming. The event was led by Nerea Arriola and the awards were given by the sponsors of Elhuyar Zientzia Azoka. The work awarded was as follows:

The other 13 finalist teams have won stays in research centers in the network of Elhuyar Zientzia Azoka. All jobs are available on the fair website: https://labur.eus/2zL8H

The Zientzia Azoka initiative, organized by Elhuyar, has the collaboration of the Department of Education of the Basque Government, the FECYT (Spanish Foundation for Science and Technology), the Provincial Council of Bizkaia, the City of Bilbao, the Government of Navarra and Erabi.