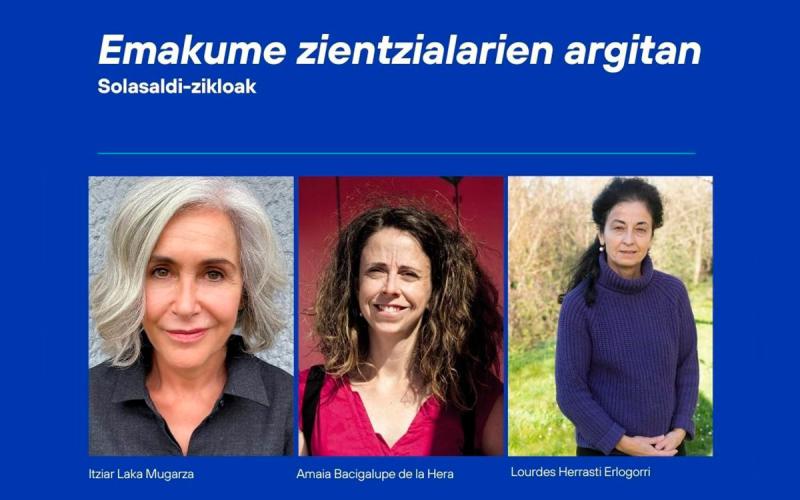 The cycle “In the Light of Women Scientists” resumes in autumn

The colloquium cycle “In the Light of Women Scientists”, organized jointly by Elhuyar and Donostia Kultura, will be continued in autumn with three more sessions, to be held on 4 October and 8 and 29 November.

The aim of this project is to get to know women scientists, because in the history of science and technology women's contributions have been relegated and hidden, and even today discrimination against women is still evident in this area.
Through personal interviews, there will be an opportunity to meet three female scientists working in different fields: Itziar Laka Mugarza, Amaia Bacigalupe de la Hera and Lourdes Herrasti Erlogorri. Answering the questions of Ana Galarraga Aiestaran, Elhuyar science disseminator, will explain the reasons that drive them to research, the questions they seek answers, the things that have surprised them and the difficulties they face. Furthermore, they will recommend their favorite books to overcome the stereotype of “two cultures” (sciences and humanities).

The first colloquium will take place on 4 October. The interviewee will be Itziar Laka Mugarza, and the title will be as follows: [Itziar Laka Mugarza: in search of the unimaginable, starting with language].
Itziar Laka Mugarza is professor in the Basque Language and Studies department and director of the research team La Mente Bilingüe of the UPV/EHU. He is a member of Jakiunde, Academy of Sciences, Arts and Literature of the Basque Country, and a corresponding member of Euskaltzaindia. She authored the grammar A Brief Grammar of Euskara, the Basque Language, available on the Internet. His research combines theoretical linguistics with experimental methods of psycho-neurolinguistics, to study the neural representation and processing of language, especially in the realm of syntax and bilingualism.

Amaia Bacigalupe de la Hera is a PhD in Public Health, Professor of Sociology at the University of the Basque Country and researcher at the OPIK group (research group on social determinants of health and demographic change). Bacigalupe is critical of the management of the COVID-19 crisis, because he does not think it is something that happened by chance, nor that it has affected everyone equally. And COVID-19 is just one example. Because health is not just the absence of disease, but well-being in a general sense. Bacigalupe is working with that vision to implement better policies.

Lourdes Herrasti Erlogorri holds a degree in Geography and History from the University of the Basque Country/Euskal Herriko Unibertsitatea and a high school teacher. He specializes in osteoarchaeology and has been working in Aranzadi for over 30 years. He has participated in important archaeological findings, such as the Neolithic site of San Juan before Portam Latinam (Álava) or the exhumation of deposits of the civil war, combining scientific rigor and humanity.

The three colloquiums will be in the Basque language at 19:00 in the event room of the Ernest Lluch Cultural Center.
The audio of the colloquiums will also be heard on the DK Irratia posters and on the Elhuyar zientzia website.