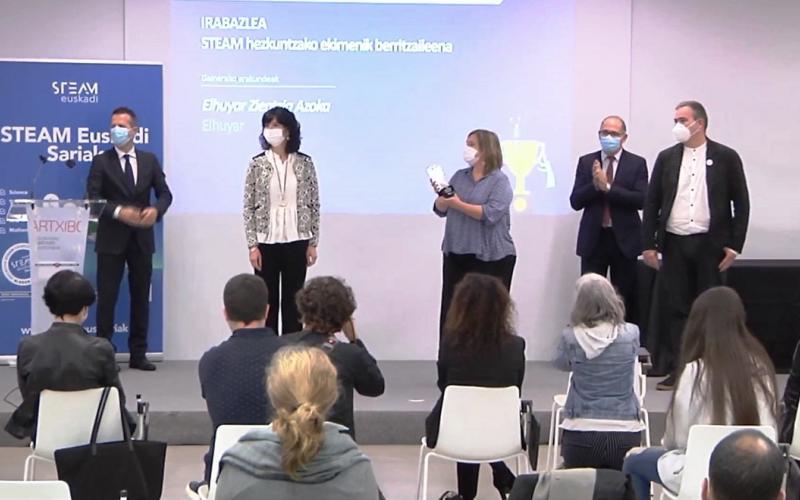 2020 | November 18
Elhuyar Zientzia Azoka received this morning the STEAM Euskadi award at the STEAM Euskadi awards ceremony. STEAM has been awarded in the category of the most innovative educational initiative. The project has been selected by the Technical Commission formed by the Department of Education of the Basque Government, the Research Centre for Scientific and Mathematical Education (GREW) and the Basque Innovation Agency, Innobasque, among the 133 candidates submitted to the call.

The jury highlighted the objectives of Elhuyar Zientzia Azoka, the STEAM character, the methodology used, the results obtained, the innovative character and the improvements to be implemented.

As a result of years of work, Elhuyar Zientzia Azoka has received the award. The project has a long history of scientific experiences aimed at young people, in which the community of the professional world of science and technology also participates. Elhuyar's formula is: “Experiences and community”.

“We knew that long experiences are the ones that affect the future of young people; that young people are protagonists, act as inventors or as researchers in the first person, that is the most important thing,” said Aitziber Lasa Iglesias, head of Education Elhuyar STEAM, when collecting the award. According to Lasa, they want to offer experiences related to the real professions of science and technology, create motivating experiences, break stereotypes, promote STEM among girls and offer other types of referents.

La Zientzia Azoka stars young people aged 12 to 18. But teachers are truly essential, and it is of vital importance what the schools themselves offer and the educational system itself, according to Elhuyar.

Aitziber Lasa also thanked the sponsors, collaborators and participants who are part of Elhuyar Zientzia Azoka. “Your collaboration and commitment is behind this STEAM Euskadi award. Thank you all.”

The first edition of Elhuyar Zientzia Azoka was held in 2013. From its creation to the present, about 6,000 young people aged 12 to 18 have participated in Elhuyar Zientzia Azoka. A total of 900 research projects or technological projects have been carried out, of which about 700 works have been presented at the Elhuyar Science Fair organized in the Plaza Nueva in Bilbao. Throughout this process, young people have had the collaboration of professional researchers from the network of collaborators of Elhuyar Zientzia Azoka to help channel the work. All this has allowed them to internally live scientific research and technological development. In addition, thanks to these alliances, young people have lived in research centers, technological centers and companies and experiences of participation in national and international scientific fairs.

In the 2019-2020 academic year, Elhuyar Zientzia Azoka has adapted to the situation caused by the COVID-19 pandemic, opening up new opportunities for difficulties. Proof of this is the first edition of the Elhuyar Zientzia Azoka video contest that is about to end. Young people have presented their research or technological projects through video. A total of 81 jobs have been received from 241 young people. Prizes will be awarded within one month.

Also, in January will open the deadline to register for the Elhuyar Science Fair of the course 2020-2021. This special year, due to the situation, Elhuyar Zientzia Azoka will be virtual. However, if circumstances allow, a face-to-face fair will be held during the month of May.