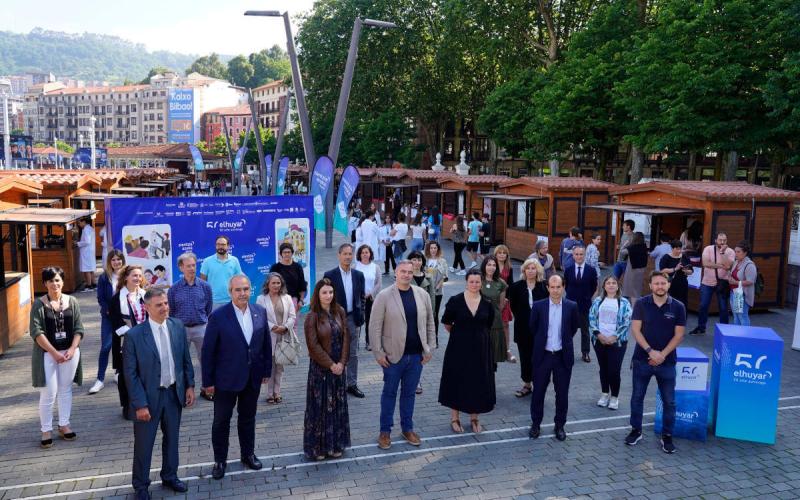 The 10th edition of Elhuyar Zientzia Azoka is already under way, following the official opening held at 10:30 a.m. Along with the agents of the Basque Network of Science, Technology and Innovation collaborating in the initiative, Koldo Narbaiza Olaskoaga, Councillor of the Euskera and Education Area of the Bilbao City Council; Joseba Mariezkurrena Cuesta, Director of Entrepreneurship and Business Competitiveness of the Basque Education Council April;

From today to Sunday you will be able to see 200 STEAM projects developed by students during the course, as well as workshops, experiments and science shows. A total of 500 boys and girls will participate in this edition. The science fair is 10 years old and coincides with the celebration of the 50th anniversary of Elhuyar.

During four days, students aged between 12 and 18 will present the scientific projects carried out during the course. You can also enjoy a Ginkana of science, viscous experiments, the Matriuska theater play and a science show called Adrenaline, among other acts. On Sunday, the day the fair is closed, the projects developed in the Bizilabe leisure workshops will be presented. (FULL PROGRAMME).

This year, for the first time, the awards will be given on a daily basis; it will take place in the same booth and will be communicated on Elhuyar’s social networks. The awards consist of stays in research companies, research scholarships and trips to national and international fairs.

In Zientzia Azoka, the science fair in Elhuyar, they will participate, in addition to the young participants, research centers and universities in the Basque Country. It is noteworthy its commitment to this project, in which 218 researchers and researchers (199 women) from universities and technology centres registered at the beginning of the course to work with students. In addition, the presence at the fair itself of research professionals who have been present to show their university projects in Arenal bilbaíno: UPV/EHU, University of Deusto, Mondragon Unibertsitatea, CFC-POLYMAT, TECNALIA and BC Materials.

Elhuyar Zientzia Azoka for the rest of the year

The aim of Elhuyar Zientzia Azoka is to promote a culture of science among young people and to promote and disseminate scientific culture, not only at this fair held in Arenal, but also throughout the year. This year, 716 young people (405 girls and 311 boys) and 54 schools participated.

The Zientzia Azoka initiative, organized by Elhuyar, is supported by the Education Department of the Basque Government, the FECYT (Spanish Foundation for Science and Technology), the Diputación Foral de Bizkaia, the Bilbao City Council, the Government of Navarra and Erabi.